5 Lessons to Learn From Apartment Anecdotes

When things get stressful, people often turn to the internet to share stories, vent, or warn others about a bad experience they had. Many of us read these anecdotes for entertainment. But they also provide an opportunity for personal growth, whether it’s learning from others’ mistakes, heeding a warning, or following someone’s good example.

We scoured the web for memorable apartment anecdotes to give you a few minutes’ break from the daily grind — and maybe teach you something too.

One woman and her husband had lived in their apartment for about six months when they and the neighbors began experiencing strange things in their homes: stuff being moved while they were out, cabinets being left open, TVs coming on after being turned off, and so on. The couple joked about a ghost living in the building.

Then one day, the woman came home and heard the TV on as she approached the door. She assumed her husband had come home early. Instead, she found a strange man sitting on her sofa.

When she confronted the man, he said, “I didn’t break in. I had the key. My dad owns the building. I can be in here if I want.”

This was partially true. He was the owner’s son, and he did have a key. What he didn’t mention was that the owner had instructed the building manager not to let him in. However, the manager broke protocol and gave the son multiple keys when he claimed his dad had asked him to perform some maintenance. Using those keys, the son watched residents’ TVs, ate their food, and used their showers.

After the woman encountered the “ghost” in her home, the owner fired the manager and offered the couple financial compensation, but they chose to move.

Takeaway: To ensure your community’s security measures are effective, always follow protocol and maintain key access logs to keep track of who has the keys to residents’ apartments.

Every Key Works on Every Door

A volunteer with a New Jersey township first-aid squad received a call about a woman who’d fallen in her apartment and couldn’t get up. When the crew responded, they found all the doors and windows locked. After the group spent 10 minutes looking for a way inside without breaking anything, a neighbor approached and asked if the woman inside was all right.

The first-aid volunteer explained the situation and asked if the neighbor knew of anyone had a key to the woman’s apartment.

“Well, actually,” he said. “I happen to know that every key in the complex works on every door. They’re all the same.”

The man retrieved his key, and sure enough, he was able to unlock the woman’s door.

"I happen to know that every key in the complex works on every door. They’re all the same."

Takeaway: Carefully consider the risks of master keys. That includes both traditional metal keys and fobs or access cards that can access multiple apartments. While they seem convenient, especially in lockout situations, they put residents at risk.

In a now-viral social media post, a Louisiana resident at a small, privately owned apartment shared screenshots of a text exchange with a maintenance worker at her building. When the man sent her a text message asking her how she was doing, the woman thought he was going to ask to come inside her apartment to fix something.

Instead, he said he was coming in “just ti [sic] see ur [sic] face.” Despite the woman asking him not to come in, he told her he’d just opened the door. She threated to call the police, at which point he played off the conversation as a joke. 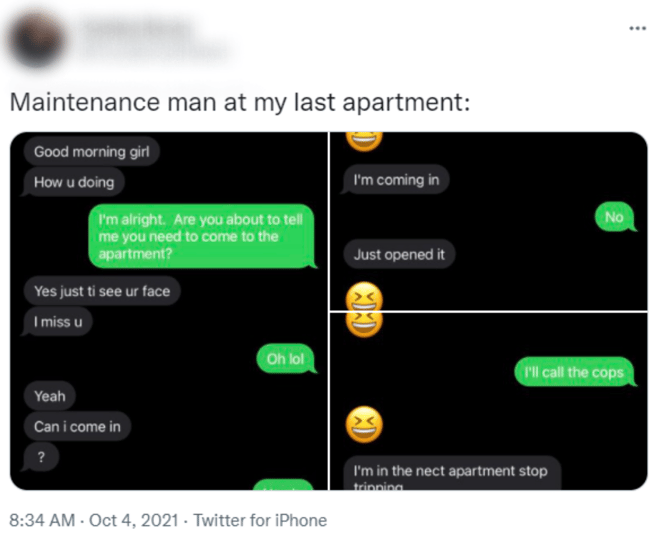 The exchange made the woman so uncomfortable that she broke her lease and moved out.

Maintenance Techs to the Rescue

Maintenance professionals sometimes get a bad rap, but they’re often the unsung heroes of property management. It’s worth recognizing three who went above and beyond the call of duty.

In Alberta, Canada, a small dog was entering an elevator with its owner when the doors closed before the dog was inside. Fortunately, a fast-acting maintenance technician was nearby and scooped up the dog. Unable to detach the dog from its leash, he held on until the leash broke and cushioned the dog’s fall.

In another case of being in the right place at the right time, a maintenance worker at a Texas apartment community was walking down a hallway when he heard an odd noise coming from the trash chute. When he checked, he found three newborn puppies, just inches from the compactor. The employee was able to transport the animals to an animal shelter for care.

A few states over in Virginia, a maintenance tech began smelling smoke coming from an apartment building. Together with a sheriff’s deputy who’d been driving by, the technician jumped into action, knocking on residents’ doors. Although 20 families lost their homes, they still had their lives, thanks to the two men.

Takeaway: It’s hard to find qualified, trustworthy maintenance professionals. But as these stories indicate, there are still those who care about the community and its residents (including the four-legged ones). It is possible to build trust between maintenance techs and apartment residents.

When a wildfire ignited in a field directly behind a Colorado apartment community, the property manager sprang into action. Taking direction from the local fire department and sheriff, she calmly executed a mandatory evacuation of the property. Although the blaze came dangerously close, the fire department managed to contain it. 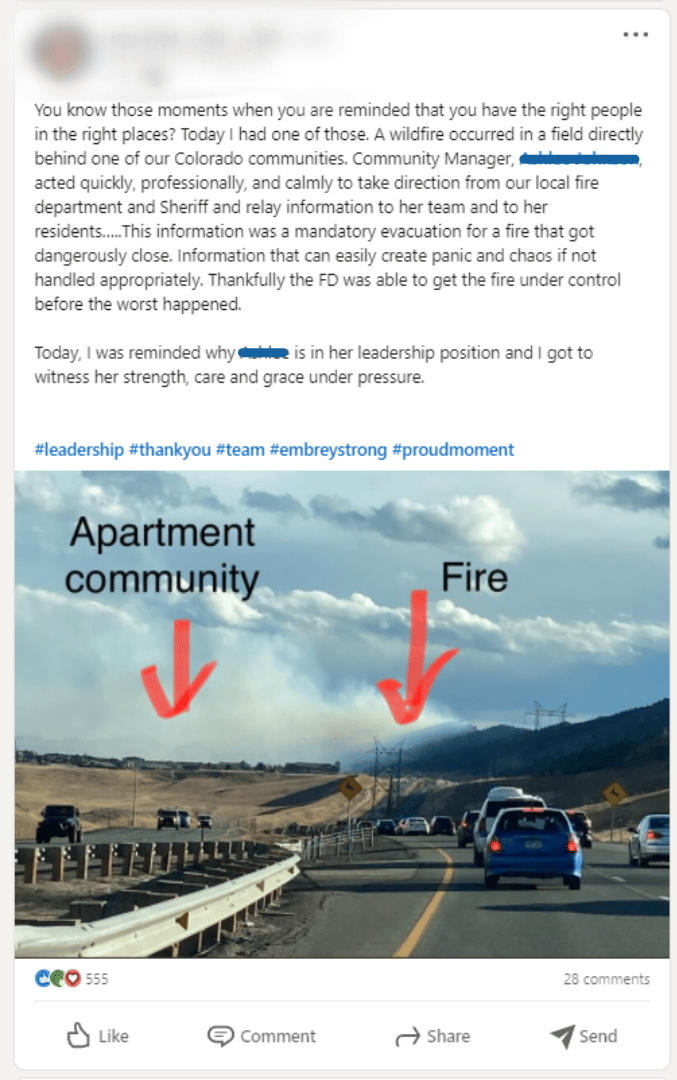 Takeaway: You never know when a disaster will strike, so it’s always important to have a preparedness plan. Once the chaos has subsided, be sure to recognize and thank any employees who helped handle the situation.

Having read these anecdotes, ask yourself: What more can our community do to provide the best living experience for our residents? Is there anything we need to change?

Key Control Lessons We Can Learn From Higher Education Institutions